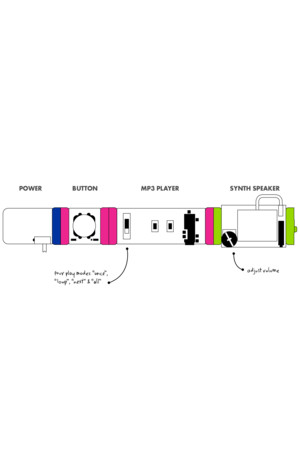 The MP3 player Bit allows you to play your very own MP3 files using littleBits.

The MP3 player Bit allows you to play your very own MP3 files using littleBits. Sending a signal to the MP3 player can make it work as a media player, sampler, or looper. Just load the MP3 files you want onto the provided SD card and you'll have music and sound effects in your next littleBits invention in no time.

The MP3 player reads MP3 files off of the SD card that is underneath the Bit. To choose the order that files are played in, simply rename the MP3 file so that it has a number in front of the file name. The MP3 player will then play your MP3 tracks in numerical order. Scroll right to learn how to control this Bit!

Use the 'back' and 'forward' buttons to switch between tracks on the MP3 player. If you are in the middle of a song, double click the 'back' button to go to the previous track. Playback is started by sending a pulse or latch through the input signal line to the Bit. The behaviour of playback thereafter depends on which of the 4 modes is selected.

ONCE MODE: Once mode behaves like a re-trigger sampler. It will play only the current selected track. Begin playback by giving an input signal pulse to the Bit. After a track is finished, playback will stop. Subsequent triggers will repeat the same track. If a pulse is sent during playback, it will start playback of the track from the beginning.

NEXT MODE: Next mode plays a track, and upon subsequent input pulses will automatically start playback of the next track in the queue. Once a track finishes playing, playback will stop.

ALL MODE: All mode behaves most like a traditional MP3 player. Playback is started and it will play all songs loaded on the SD card in order, without interruption. Input pulses or latches will stop and resume playback.

VOLUME CHANGE: If you find the maximum volume of the MP3 player is not suitably loud enough, you can add 12dB of gain by simultaneously pressing the back and forward buttons. To remove the extra boost, press the 2 buttons again to switch back to normal mode. Thermodynamics and Fluid Mechanics: An Introduction